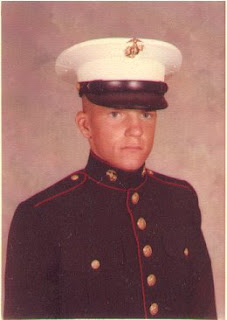 Today is September 22, a very special date. Yes...the first day of fall, but something much more important to me. It is a birthday for me. Not the day I was first born, but a birthday no less. On September 22, 1976, I graduated from Marine Corps boot camp at Parris Island, South Carolina. It was the day when I became a Marine and was first called by that title. It still brings a thrill to think about it.

On June 28, 1976, six nervous recruits left from the AFEES building in Atlanta for the airport where we were flown, courtesy of our dear Uncle Sam, to Charleston, South Carolina. There we were met by a Marine Corps liaison and began meeting other young men from around the country who would share one of the most frightening experiences of our lives -- our arrival via bus. Our "incarceration" had begun. We were limited to a small area of the airport where we were able to have supper, but those who wanted alcohol to settle their nerves found out everyone there was in on the plot. Just like the flight attendants on the flight to Charleston, the airport staff would not serve any recruits alcohol. It was all for the best, because it would be three days before we would be allowed to sleep again.
The ride from Charleston to Parris Island was made in the dark of night. We weren't to be allowed the pleasure of scenery, or to comprehend the route to the island that would be home for many of us for the next three months. As we rode past the sentries, we all realized it was about to happen. We were about to meet the people we'd had nightmares about for months. The Marine who came onto the bus to deliver our "welcome" didn't disappoint. We all flew off the bus and headed for the yellow footprints which would give us our first lesson on how to stand with our heels together at a 45 degree angle. Throughout the night, we were shuffled from place to place, filling out paperwork and having instructions barked at us...more instructions than we could possibly remember. Around 4:00 a.m. we were marched into the barbershop for a "trim". Stout South Carolina barbers were waiting to begin the first step of making us all look alike -- our first step of becoming a uniform outfit. The haircuts were brutal -- shears were pressed onto our scalps, and with long sweeps off came hair, warts, moles or any other obstacles that might reside on our heads. I saw several recruits come from the barber chair with lines of blood streaming down their heads. 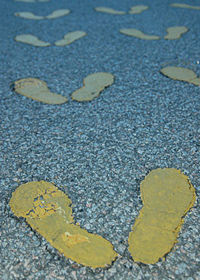 Over the next several days we went through medical tests and inoculations; had every possession we arrived with bagged , marked, and taken to a warehouse; were issued our clothing and 782 gear (basic field equipment); and spent hours marching clumsily from place to place and standing in lines for hours. About the third day we were loaded into a trailer and taken to our permanent barracks where we met our platoon's senior drill instructor and drill instructors. While this was another nerve-wracking experience, it was also a relief from the stressful days of formation. We ran into our barracks -- my platoon was on the second deck (floor) -- and found the rack that corresponded to our laundry numbers. Since I was Bohannon, my laundry number was 4, which put me only one set of racks away from the DI hut. We spent 30 minutes standing at attention on our knees on the concrete floor. The senior drill instructor explained a few days before graduation why they do this -- they have to weed out quickly anybody whose knees won't take the strain of prolonged pressure.
Marine Corps basic training takes place in three phases. Phase 1 is a period of complete breaking down of the individual. The stress, physical and emotional, is intense and never lets up. We have our initial PFT (physical fitness test) and begin PT (physical training) and lots of drill. We learned how to do a school circle -- which is usually four even columns. Our classroom instruction did not take place in chairs or desks, but sitting at attention on hard floors.
Second phase consists of the rifle range, water qualification, and various other training. The breakdown period of first phase transitions into a phase of grooming Marines, but the pressure still never lets up. Third phase we finally get to get high and tight haircuts instead of the shaved heads that we've worn through the first two phases. We are becoming Marines. We've qualified with the rifle and passe other important tests; we are feeling more like fighting men.
Third phase consists of intense combat training. We get to participate in military maneuvers and learn important combat skills, like how to throw a hand grenade, how to use the bayonette to look for landmines, how to detect booby traps, etc. The training culminates in several intense days which are now called "The Crucible", but when I was in boot camp it was called Individual Combat Training (ICT). There was also the Essential Military Subjects Test (EMST), where we were examined in 12 areas, including NBC (Nuclear Biological Chemical warfare -- which includes a visit to the gas chamber), UCMJ (the Uniform Code of Military Justice), Close Order Drill, Marine Corps History, Military Customs, field stripping the M-16 and putting it back together, identifying various grenades by touch, and first aid. 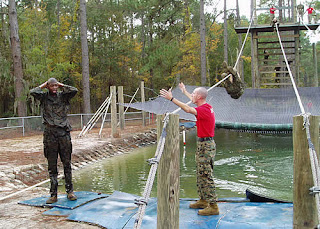 One of my favorite parts of boot camp was the Confidence Course. There are various structures designed to intimidate and test courage and strength. Probably the most well-know obstacle is the Slide for Life. The recruit slides across a rope stretched over a pool of water. There are three positions: the recruit begins with his stomach on the rope, one foot over and one leg hanging down; at the changeover point, the recruit hangs by hands and legs with head facing the destination; finally, the recruit changes to the same position but with the feet heading toward the destination. Anyone falling has to snap to attention and yell "Marine Corps!" till he hits the water. Fortunately, I didn't fall -- even though two mischievous DIs began shaking my rope for their amusement.
There is no way to put into words adequately the stress, the uncertainty, the homesickness, and all the other emotions and sensations of the training that leads to becoming a Marine. All I know is on the final day it was all worth it as I marched across the parade field and heard that depot band playing the marching songs, then standing at attention as we were first called Marines, then hearing the "Marine Corps Hymn" for the first time as a Marine. Fortunately, one of the benefits of becoming a Marine is -- Once a Marine...Always a Marine. Don't call me an ex-Marine. I am a Marine. And today is my birthday. And I'm still proud, and the "Marine Corps Hymn" still gives me goosebumps and leaves tears of pride in my eyes. SEMPER FI!!! and OOH RAH!!!
____________________
Photos:
Posted by Jim Bohannon (aka Maché Artist) at 8:28 PM

Below is a link to a Hollywood-style book trailer on youtube.com for "Once a Marine: An Iraq War Tank Commander's Inspirational Memoir of Combat, Courage, and Recovery," by Nick Popaditch with Mike Steere (Savas Beatie, October 1, 2008).

Make sure you watch to the very end for a "special" photo message from "Gunny Pop" Nick. I know you will appreciate seeing him.

Nick "Gunny Pop" Popaditch is a former marine Gunnery Sergeant, a Silver Star winner, a 15-year veteran of the USMC, and was widely known around the world as "The Cigar Marine:" (Google it.). His tanks captured Firdos "Saddam" square in April 2003 and pulled down the hated statue. Nick was severely wounded one year later with an RPG to the head, which was captured live by a media news crew. He had to fight his way through an incredible odyssey of turmoil, heartbreak, and bureaucracy to recover everything he had lost. His website is www.onceamarine.com.

PLEASE NOTE this YouTube trailer is the LOW-resolution version. The high-resolution trailer (with full credits, etc.) will be streaming off a variety of websites including www.savasbeatie.com, and can be opened to full screen to fully appreciate the ending credits and power of the imagery. It will also be available for free high-resolution download, and is TV quality!


If you know anyone in the media who you think would be interested in interviewing "Gunny Pop," don't hesitate to call or email them and let them know.

We appreciate your support of Nick and his family in any way you are able. The success of this book will open doors for this blind warrior, and hopefully provide revenue and success to someone who has sacrificed so much for his country.

Thank you for your dedicated service to Our country. Without people like you, the US would be very different.