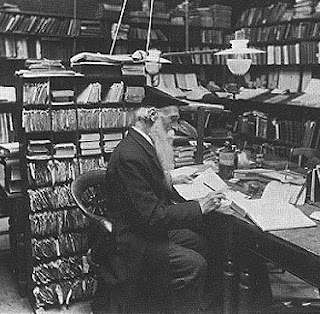 James A. H. Murray, long-time editor of the OED, working in his Scriptorium.
Two of my favorite books are The Professor and the Madman

and The Meaning of Everything

, both by Simon Winchester, and both related to the creation of the largest and most comprehensive dictionary in the English language, the Oxford English Dictionary

, or the OED, for short. I’m not going to review the books here, other than to say I was fascinated with the decades-long work of collecting words for that magisterial dictionary.
When I was in high school, I started collecting word lists. Whenever I read, I would write down unfamiliar words, words that I simply wanted to be more familiar with, or common words I wanted to appreciate more. I’ve continued this practice to this very day and have no intention of ceasing the practice. Words are beautiful, they have power, they amaze me. The other morning, shortly after I woke up, I reached for the notebook I keep by the bed and with my favorite mechanical pencil began free-writing…about words. And this is how it came out:

______________________________
I have words! Oh yes, I have words. Folders stuffed with sheets of loose-leaf filled with words collected from books and magazines and anywhere I found them. There are strange and exotic words. There are ordinary, commonplace words that would scarcely make a jaded reader bat an eyelid, but still they are good words, honest words – and without them, the more sparkling, dazzling, exorbitant words would not find a context within which to sit. One thing is for sure – they are all beautiful words, glorious and necessary…as necessary as air or water; I can’t do without them.

I have notebooks full of words, and lists of “vocabulary” words on my computer. And I keep adding more words all the time. Some of the words I add, I don’t know, or I want to know better. Others I know quite well. They are simple, common, everyday words – but I don’t want to fall into the trap of taking them for granted. I used to lie on the ground for an hour or more at a time studying the shapes and structures of blades of grass, watching the ants stroll by, or imagining what a microscopic view of the physical structure of a grain of red clay might look like. I am just as fascinated with words. 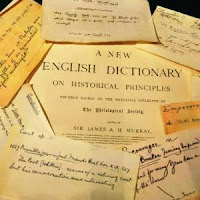 Words give me joy. They fill me and fulfill me – they nourish me. Sometimes they hurt me, scold me, or embarrass me (I even have vulgar words in my list… “those” words, the ones we used to look up with relish in the dictionary in junior high). They have all earned the right to be on my lists, even archaic words that long ago fell from common use, because someone at some time has used them. They have expressed, admonished, encouraged, enlightened, frightened, challenged, disgusted, chastened, delighted – in all cases they have elevated the blandness of mere survival to the heights of meaning. I have words. And before the day is over, I will have a few more.
Posted by Jim Bohannon (aka Maché Artist) at 11:56 PM No comments:

Resolution 1 - Write and Get Published 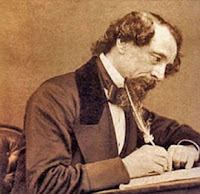 When I was a boy, and people asked me that standard question, “What do you want to be when you grow up?”, I cycled through some of the typical answers…fireman, cowboy, and for some reason, I seem to remember I told people for a while I wanted to be a motorcycle when I grew up (yes, it's bizarre, but I have no recollection of what my little-boy brain was going through at the time). I don’t recall, however, telling anybody I wanted to be a writer.

By the time I was in high school, though, it was clear to me – I wanted to be a writer. Whatever chain of events led me to such a desire are lost to history. I’ve found stories that I wrote when I was still a young boy, maybe 9 or 10 years old, that are respectable, even though the topics are pretty common. There was an adventure with Lassie (the collie) and a trip with some green aliens on a flying saucer. By the time I was settled into my miserable high-school career, I was writing poetry (don’t all teenagers?), starting mystery and suspense stories, and constructing essays that explored my views on everything from feelings about girls to religious convictions to the problem of excessive violence in the world.

In 11th grade, I believe it was, I signed up for a typing class. Those were the days before word processors or computers, so all the paperwork in an office had to be spaced and centered and lined up on manual or – if you were fortunate – electric typewriters. I had no interest in being a secretary; I just wanted to learn the keyboard well enough to type my poems and stories.  The school year, in those days, was divided into six-weeks for the purpose of reporting a student's progress (or lack thereof).  By the end of the third six-weeks, my grade was down to a not-so-respectable…zero. That’s right. I was typing away every day, but I didn't complete a single class assignment – for the entire six weeks! Finally, my teacher told me if I wasn’t going to do the assigned work, I might as well just go to the library. Fine, I thought. So, for the next two weeks, I sat in the library reading. Then one afternoon, Ms. Smith showed up at the library. Framed in the doorway, arms akimbo (she didn’t come in – I was sitting near the door…in case friends walked by), she said, “I’ll tell you what. You come back to class, and do half the class assignments. The rest of the time you can write whatever you want, and I’ll count that.” I walked back to class with her, and by the end of the term, I actually passed with a 76, and had lots of story starts, poems, and essays.

After high school, I went into the Marine Corps. I spent the next 3 months at Parris Island, South Carolina, undergoing the grueling program of training to become a United States Marine. Most of the writing I did for those months was in the form of letters home. During the few minutes of free time we’d have in the evenings, I still wrote a little bit. After boot camp, I had electronics and avionics training. Along the way, my interest shifted to comic art. I still wanted to be a writer, but more than that, I wanted to be a comic book artist, or maybe even an animator.  I still wrote, occasionally, but most of my creative energy was spent practicing drawing superheroes, silly animals, or Disney characters.

Through the years, writing has always been a very pleasant obsession. I don’t want to mislead anybody – I don’t write enough. Never have. During college and seminary, I wrote a lot of academic papers, and along the way received frequent compliments on my writing, and a few suggestions that I should be a writer.  If I had been more focused and disciplined, I might have had several best-sellers by now. Actually, my writing (much like my music…more on that another time) has mostly been a very private thing. With fits and starts, I have begun projects, filled notebooks and folders, written and re-written, and had things published in school papers, church and denominational newsletters, and local newspapers, but I haven’t been the successful writer I dreamed of becoming all those years ago.

It’s time. I have been actively working on a novel, and I have several other projects in the works. “What’s your book about?” people ask. “Uh, I guess you could say it’s a contemporary fantasy.” I don’t like to talk about my work. It has been encouraging to find out I’m not alone among writers. Most, if not all, writers of any merit don’t talk about their work in progress very much, unless it’s something under contract to a publisher and they want some advance publicity. I found an imperative in a book I recently bought, another inspirational book for writers, Page after Page, by Heather Sellers, but I will have to paraphrase, because I can’t find the exact sentence again, after looking though the book for 10 minutes – don’t tell people what you’re writing. Yes! I had to show this to several people, I was so excited.

Writing is hard work! There is no way around this. I confess, I avoid it more than I do it, but I am going to change that nasty habit this year…this month…this day! I am a writer. Even though I have no books on the best-seller lists, or essays in prestigious journals, or a short story published in the New Yorker, I am still a writer. Just like I am a musician. I don’t have any albums out. I don’t play with a band or perform in concert. But I play instruments, and I sing, and quite frankly, I’m not half bad at it. Same with writing. I’m not half bad at it. But this year – I will write. I will publish!
Posted by Jim Bohannon (aka Maché Artist) at 3:22 AM 2 comments:

Wow!!! My last entry was in November of 2008, I am ashamed to say. I never intended to leave my blog unattended for so long. But...I am back!

I usually avoid making New Year’s resolutions, but this year I decided to change that. This year I have made resolutions. There is a chance I may add more, but these are the basics. For the year 2011, I hereby resolve:

1) To write and get published.

3) To sculpt and get my work into a variety of markets.

6) To increase my mastery of Spanish.

8) To learn how to read Sanskrit and Arabic.

9) To become more skilled in ancient Hebrew, Greek, and Latin.

12) To believe again, and ever more wisely.

13) To return to an intensive exercise program.

15) To enjoy being human, and to embrace all that entails, both good and bad, pleasant and painful.

16) To be more loving, and hopefully more lovable.

17) To continue sharing my warped sense of humor by unleashing the corniest off-the-cuff jokes and puns. (This is a given, every year!)

18) To rekindle my love of growing plants.

19) To consider attending church again, albeit sporadically and with great apprehension.

21) To look for stories everywhere.

22) To nurture my passion for and fascination with...everything!

23) And last (and possibly most important) to be happy!

I was going to elaborate on each of these a little bit, but it was turning into a pretty lengthy piece of work. So…I will leave it at this for now, and I will explain more about these in subsequent blog entries.

HAPPY NEW YEAR! I wish each of you the happiest and most prosperous year ever.
Posted by Jim Bohannon (aka Maché Artist) at 12:56 AM 2 comments: