Way-Back Machine -- "A Shrine for Things Taken for Granted"

In case you don't remember the Way-Back (WABAC) Machine, you can take a look at my blog entry for Friday, February 23, 2007.

A book listed in "A Common Reader," August 2000 catalog, is They Have a Word for It by Howard Rheingold. It is a gathering of foreign words that have no equivalent in our tongue. One 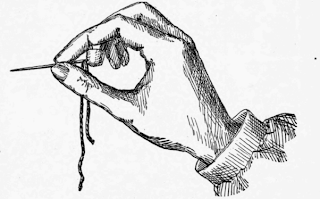 mentioned is the Japanese hari kuyo which is "a shrine where broken sewing needles are put to rest after a life of service." That's incredible! We just toss things. What if we had shrines composed of faithful objects that had served us well? What if we just developed a profound sense of appreciation for things we take for granted? Say ink pens -- old shoes -- car keys -- etc. We need a shrine dedicated to "all things taken for granted!"
Posted by Jim Bohannon (aka Maché Artist) at 9:46 AM 3 comments:

This morning in church, my grandson, David, was playing with crayons, and he dropped several on the floor. He bent down to pick up the crayons, and I saw my daughter put her hand under the hymnal rack anticipating David would lift his head oblivious to the danger. Sure enough, David lifted his head, but instead of hitting it on the sharp corner of the hymnal rack, his head met the soft, loving hand of his mother.

This was a simple scene, but to me it was so tender and touching, and it seemed to be a moment where something remarkable had been shown to me. Perhaps, I thought, this is how God’s hand works. He anticipates a danger and puts his hand there to protect us. There are two moments which came to mind, one recent and the other which happened a couple of summers ago.

It was opening night of Baldwin High School’s production of The Wiz, and my son Patrick had several roles in the play. After the play was over, a couple of judges from state who were in the audience to evaluate the play’s potential at state competition, went back with the cast to talk about the performance. It took a while, and afterwards we were hungry, and since it was so late, we decided to go eat somewhere. Trying to decide where was not easy, since choices at this hour were limited to a few fast food places. I reluctantly agreed on Kentucky Fried Chicken.

When we pulled up in the parking lot of KFC, we weren’t sure if the place was still open. There were no customers in the store, but when we walked in, a girl welcomed us and asked for our order. No sooner had we begun placing our orders than there was a loud pop from the back, and a girl began screaming, “Fire!” She added some other colorful language I’ll omit, since I try to keep the blog at least GP rated. Another young lady, apparently the manager, came into view from the back and shouted to us there was an emergency and we’d have to leave, that they were now closed. In all the frantic commotion we decided to stay to make sure everyone was all right. The staff consisted of three girls, a couple of them probably high school age. They couldn’t get the fire extinguisher off the wall and were all panicking. The girl who was waiting on us began filling a large pitcher with water. As she headed in the direction of the fire, I screamed, “No! Don’t throw water on a grease fire!” She turned around and questioned, “No?” I explained quickly what throwing cold water on a vat of flaming grease would do. It would most likely have exploded and thrown hot grease over everyone nearby, and the fire would spread as the flaming grease floated on the water.

They were eventually able to get the fire extinguisher off the wall and got the fire put out, but that was a close call. As we left, I was suddenly aware that we had come to KFC for one reason – I had to be there to keep that young girl from throwing water on that fire. She probably would have been severely burned. As I slipped into the car, the realization of this made me weak for a few seconds. There was “The Hand”.

Two summers ago, we took a group of high school and middle school kids from our church to Brunswick, Georgia. The mother of one of our college students had opened her home to us so we could go to the beach. We left in the afternoon to get there in time to have supper at a popular sea food restaurant on St. Simons Island, then returned to the house where we spread blankets and sleeping bags on the floor in several rooms. The trip over the causeway to St. Simons had whetted our appetite for the beach the next day.

The next day, we loaded up and headed back to St. Simons. After a bit of shopping in some of the interesting stores on the island, we headed to the beach. It was a sunny day and very hot. It was a pleasure to get into the water. Being one of the adults in charge, I kept my eyes open, constantly scanning the water to keep up with our kids. I noticed my youngest son Patrick floating on a football had gotten a good distance from the shore, so I waded out as far as I could stand up and yelled for him to come back closer to the shore. He yelled back that he couldn’t – he was caught on a current. I can’t tell you the shock of watching my child in the ocean well out of reach and heading for deeper water. Immediately I started swimming out till I reached him, but when I I turned around and tried taking us back to shore, I realized two things: 1) we were further out than I thought, and 2) we were both caught in a current taking us even further out. I tried swimming with all my might, but I wasn’t making any progress. The beach and all the people looked so far away, but I started screaming. No one heard. I can’t remember being as scared. I noticed a man with a boogey board and a couple of girls that were a little closer in playing with a Frisbee. I screamed as loudly as I could, and the man finally heard me. As soon as he realized we were in trouble, he headed out to us. He was able to pull us back in, and finally I was able to stand on the bottom. Fortunately, not only was he equipped with a plastic flotation device, but he was also a trained lifeguard who just happened to be within hearing range of my screams. There it was – “The Hand”. I still shudder when I remember that afternoon.

Of course, some will be quick to point out that there are many times when “The Hand” doesn’t seem to be there. I constantly question why bad things have to happen – earthquakes, floods, the terrible tsunami of December, 2004. Why do children get sick and die? My first son never came home from the hospital, but died in my arms at 9 days old. Why? I just don’t understand. However, this doesn’t keep me from seeing “The Hand” so many times, just like my daughter’s loving hand stretched out to protect her son from harm. And for that, I am thankful.

Posted by Jim Bohannon (aka Maché Artist) at 1:11 AM 4 comments: