In The Declaration of Independence, we find these words: "We hold these truths to be self-evident, that all men are created equal, that they are endowed by their Creator with certain unalienable Rights, that among these are Life, Liberty and the pursuit of Happiness."

We Americans are a privileged people. Although we are continuously reminded these days of the proliferation of anti-American sentiment by various people around the world (and even some in this country), we are heirs to a heritage of freedom, hope, and optimism that much of the world can only dream of. With tremendous privilege comes tremendous responsibility. Today we remember and honor those who have borne that responsibility with their lives. 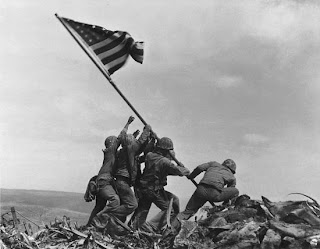 Consequently, we are reminded of the service of every man and woman who takes the oath of military service. In November of 1975, with my heart pounding and goosebumps rushing to cover my body, I raised my right hand and repeated these words as I enlisted in the United States Marine Corps:

Today I salute all my brothers and sisters in arms who’ve shared that oath (or one very similar) and who bear those arms not for malicious purposes, but who bear them to stand guard over my freedom and yours, and to keep safe the country that, despite its many flaws and shortcomings, stands as the greatest beacon of hope to the world. To those who’ve paid the ultimate price for freedom and honor, and for those who’ve been willing to face the possibility of paying that price, may God bless you always – and, indeed, may God bless America!

SEMPER FI!!!
Posted by Jim Bohannon (aka Maché Artist) at 9:28 PM No comments:

Email ThisBlogThis!Share to TwitterShare to FacebookShare to Pinterest
Labels: America, honoring those who gave their lives, Memorial Day, oath of enlistment

Rip Van Winkle, the Prodigal Son, and the Author of this Blog...

Hmm...now just what do Rip Van Winkle, the Prodigal Son, and the author of this blog have in common? Tick, tock, tick, tock, buzzzzzz...time's up. They all disappeared and didn't show up where they belonged for quite a while. Wow! Can you believe it's been over three months since I last posted anything at my blog! That just will not do, and I can't let that happen again.

So much has happened since the last time I spoke to you. My brother went into the hospital again with congestive heart failure and almost died again (but he's back home, on regular dialysis, and better be watching his diet). A good friend of mine got very sick, and my wife and I took her to the emergency room with a fever of 104 degrees, and we were waited on by a medical team that obviously either trained with the Three Stooges or got their credentials from Clown College. But...she survived and recovered after lots of tender, loving care. I celebrated my 51st birthday (on March 28th), but I haven't felt younger in years (probably in great part because I'm still working out regularly...yay!). Cris and I celebrated our 25th wedding anniversary, but we didn't get to go to the bed and breakfast in the mountains like we'd planned, because the transmission went out in the car and sucked nearly $2000.00 out of savings, and this just after paying nearly $400.00 for repairs on the van. This left roughly enough in our bank account for us to stay in bed here and have a bowl of cereal for breakfast (not the bed & breakfast we'd envisioned for a milestone...but we're gonna make up for it as soon as school's out!).

I have lots of notes about subjects I want to write about, like how my writing has not been going well at all. Heck, it hasn't even been going badly. It just hasn't been going...but that's changing. I'm also working on sculpting using a new technique -- more on that later (when something is finished and I can show you). There is a presidential campaign going on -- in case you haven't noticed -- and I have some thoughts. Boy, do I have some thoughts. Oh...my one year old grandson lost his Medicaid, and we've been unable to get it back, and we can't apply for the children's health insurance, because he qualifies for Medicaid (go figure!). Soooo...my toddler grandson is uninsured. Meanwhile, my oldest son lost his job (painting houses) weeks ago and has run out of unemployment (and has a second child on the way). That means I have two grown children and their families with no health insurance and inadequate incomes. Don't you just love the American Dream!

Ahhh...yes, there is so much to talk about, but for now, I just wanted you to know I'm still around. So, kill the fatted calf, bring the best garments and the family ring, and stir up the merriment -- the Prodigal has returned!
Posted by Jim Bohannon (aka Maché Artist) at 11:17 PM 2 comments: