A Visit to the Georgia Aquarium

When I was in my early teens, I had a book on aquarium fish full of pictures and information that gave me hours of pleasure. I dreamed of one day owning an amazing aquarium. For starters, I planned to have a basement, and one entire wall was going to be an aquarium sectioned off into various environments. Plants and fish and rocks and assorted scenery decorated my mind (still does, as a matter of fact).

Actually we've owned two or three aquariums over the years, nothing approaching even in miniature the fantastic dreams I nursed in my youth. After a while the aquariums became the visual equivalent of white noise at best -- or worse, a tedious chore. Too many things in real life competed for money, time and energy, and it seemed like the only fish we had any success with were plain-colored danios.

On Friday my dreams took flight again. We visited the Georgia Aquarium in Atlanta, the world's largest aquarium. It turned out to be an expensive day after tickets, gas for two vehicles, and food, but it was worth it. We all had a ball!
I want to share some of the pictures of our day at the Georgia Aquarium, and if you're ever in the area -- I highly recommend a visit there. 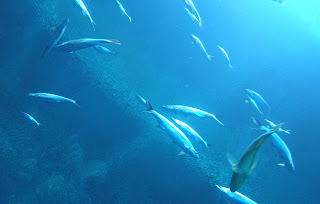 There are spectacular views throughout the aquarium. 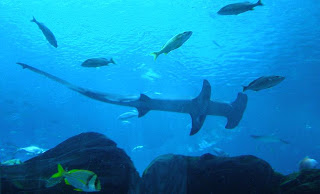 A hammerhead swims among assorted fish and rays. 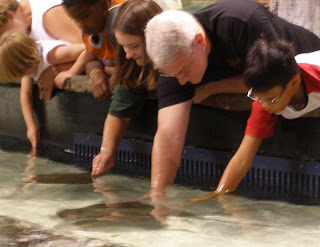 Can you believe it! A petting zoo at the aquarium! It was fun, even after one of the bonnet sharks swam over my hand and tried to take a nibble (we didn't realize it was almost feeding time). 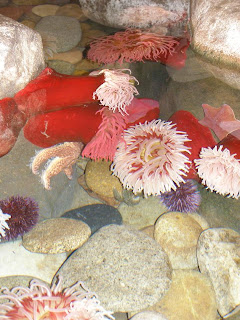 The anemones were beautiful -- and you can touch them too! 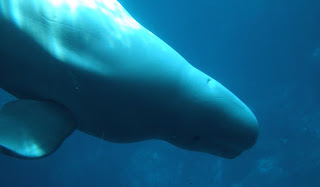 This beluga whale was a big, graceful showoff. It was my daughter's favorite. 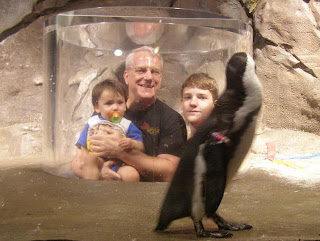 This South African penguin enjoyed watching us as we watched back from a glass enclosure inside its habitat. 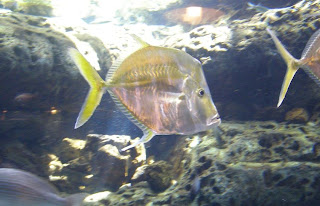 I can't remember the species of fish, but this pretty specimen is indicative of the beauty housed in this aquarium. 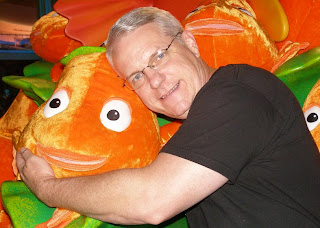 I couldn't leave without giving a hug to Deepo, the Georgia Aquarium mascot. Boy, I love fish!

Posted by Jim Bohannon (aka Maché Artist) at 11:20 PM No comments:

A Flower for Mama: A Lesson That Finally Bloomed

The house in which I grew up was small and Spartan. My mama seems in my mind to be perpetually standing at the sink washing dishes and looking out the window at a little patch of the world she loved and from which she never strayed far or for long. There was no running hot water in the kitchen, and Mama always kept a kettle on the stove to heat water for washing dishes. The immediate view out the kitchen window was the crepe myrtle just across the driveway, surrounded by one of the poorest scraps of soil on the property, so when one of the tulips Mama had planted there actually came up and bloomed, it gave her a simple yet profound private joy of which her three year old son (that would be me) was utterly unaware. 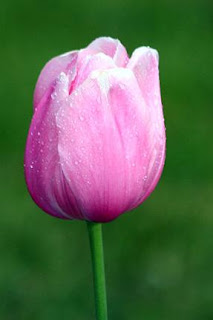 Playing in the yard early one afternoon, I noticed the flower. Knowing how Mama seemed to enjoy flowers, I thought she would love to have this one in the house, so…I picked it. Mama must have been at her post staring out the window, because she met me at the door as I rushed in to present the gift. I couldn’t wait to see how happy Mama would be, so I was completely unprepared when she began scolding me for picking her flower. When I started sobbing hysterically, Mama was immediately repentant and took me in her arms trying to console me and apologizing for scolding me, because she realized I was only trying to make her happy. But the episode left a shadow on my early childhood that led to an event which my daddy enjoyed telling with a chuckle for years.

I was riding in the car with Daddy down a country road. In those days seatbelts and child restraints were unknown, and I always traveled standing in the center of the front bench seat with my arms spread across the back of the seat for balance. We came to a field that seemed literally to explode in color with wildflowers. Daddy pulled the car over and started to get out. He said, “Let’s get your mama a bunch of flowers.” With a serious look, I shook my head and said, “No, Daddy. Mama don’t like flowers.”

He couldn’t coax me out of the car, so he climbed back in and we went home. He told Mama about the flowers and what I’d said, and she explained about the tulip. It was something Mama always regretted. I remember once when we were sitting around the table at Mama’s house sharing this story with my children, Mama laughed, but she came over and kissed me lightly on the back of the neck, hugged me and said, “He just wanted to give his mama a flower, and I should’ve just taken it.” 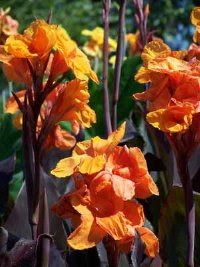 In my teens, I fell in love with growing things – flowers and plants of every kind. I started a compost pile and took cuttings, seeds, and bulbs from all my elderly aunts whose houses lined the street across the field from our house. Eventually I worked some good topsoil and compost into that sorry patch of earth across from Mama’s kitchen window and planted cannas which had been struggling to grow in another part of the yard. They performed magnificently, reaching seven feet in height and blooming profusely. I told mama I had finally made up for picking her tulip. She just laughed and hugged me and said she loved looking out that window more than ever. I was wrong, Daddy – Mama really did like flowers.
Posted by Jim Bohannon (aka Maché Artist) at 10:08 PM 2 comments: