My first grandson is one year old today! It's hard to believe. The joy he has brought into our lives is indescribable, and I can't imagine a world without him. We'll have a party on February 9th (yeah...I know, but we tend to draw birthdays out for weeks around here). 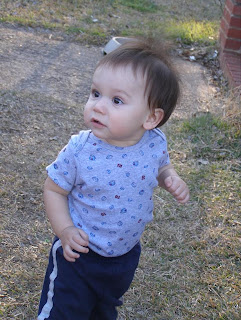 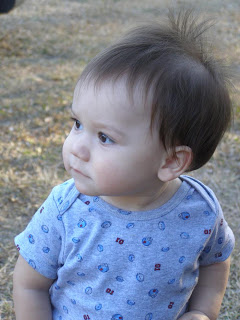 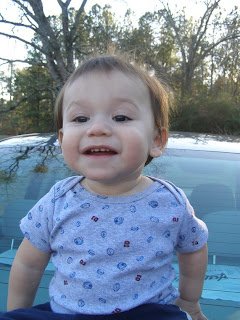 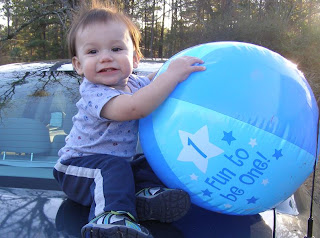 Email ThisBlogThis!Share to TwitterShare to FacebookShare to Pinterest
Labels: first birthday, my grandson

We're heading for the two week mark of the new year, the point where I understand many people start falling by the wayside on those ambitious resolutions. That's just one reason why I never make any. I have resolved not to resolve -- and that's the only one I keep. However, I do have some serious plans and resolute intentions for this year, and I am sticking with them. I actually began before the new year, but I plan to keep the momentum going throughout this year -- and beyond.

It's about time to check the classifieds -- I want a treadmill. This may be the time when all those good intentions are wearing thin, and those people who splurged on fancy exercise equipment have decided to cut their loses. Don't know where I'm going to put it, but after taking a run on a chilly afternoon it's taken days to shake the cough (actually, I still haven't shaken it). I'd love to be able to run in my office with some good, inspiring music blasting from my Bose speakers. Fortunately, we do have a new exercise bike -- the kind with the pedals out front -- that I got for my wife, who recently had knee surgery. We are putting it to good use.

I'd bought a new weight bench a few months back, and immediately hurt my back and was in such pain I couldn't even assemble it. Then my oldest son came over and put it together -- but we had no weights. We finally went to Academy Sports & Outdoors and got a set of steel free weights, and I was like a child at Christmas (even though we got them a few weeks before Christmas). It still took a couple of weeks to get going, but thanks to my youngest son -- who has been using them -- I worked out one afternoon, and I've been doing it ever since.

I've lost about 15 pounds, dropped two pants sizes, and my musculature is re-appearing with surprising definition. And I'm feeling good (except for the tendinitis in my left arm). I'm not eating nearly as much, and I don't miss it. A couple of weekends ago, we had to go shopping. I needed new clothes! From size 40 to size 38, and I'm on the way to 36! Pardon me if I sound a little boastful, but I feel I deserve it. This has taken weeks of hard work and determination -- and I am a little proud.

I've been writing for years, but I've never had the focus to stick with a project longer than a modest poem -- not counting journal entries and the occasional blog. Now, however, I am actively working on my first novel. I've enlisted a bakers dozen of some of the most intelligent and wonderful people I know to be readers for my book, and I plan to be ready to shop for an agent by April. Now I feel like I can really call myself a writer.

In case any of you were wondering why my blog hasn't been updated in nearly a month -- now you know. But...I hope to do better with posting. I started this blog as an outlet to share my writing and ideas, and I don't plan to abandon it.

Best Wishes to My Blog Readers

To all of you who've been faithful readers, and to those who stop by from time to time -- and to those of you who may have just now discovered my little home on the Internet -- I wish a very blessed, peaceful, and successful 2008.
Posted by Jim Bohannon (aka Maché Artist) at 9:57 PM 2 comments: